My Facebook and Twitter friends all know I'm a bit obsessive about my new baby, a 2010 MINI Cooper S.  To buy the car with ALL the options I wanted would have broken the bank.  So, I bought one that was within my budget and I'm doing after market customizations piece by piece.  First thing was to replace as many stock parts with chrome as I could.  I love pretty, shiny things.  But before I go into that, I found an old picture of some iced green tea sweetened with a mint and ginger simple syrup.  I had made this a couple of months ago.  Today has been so hot.  I wished I had a tall glass of this tea to help cut the heat. 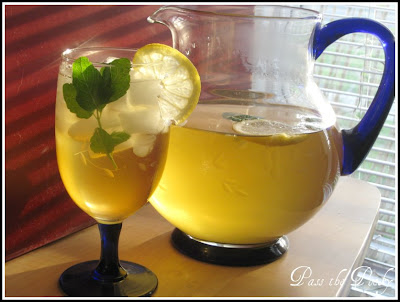 There's no real recipe.  I just brewed a pitcher of green tea and made the mint and ginger simple syrup.  I used one cup granulated sugar and one cup of water.  In a small saucepan heat the sugar and water and bring to a boil. Float in a couple slices of peeled ginger root and a few sprigs of mint.  When the sugar is completely dissolved remove from heat and cool to room temperature. Remove ginger and mint.  Add syrup to tea.  Sweeten to taste. 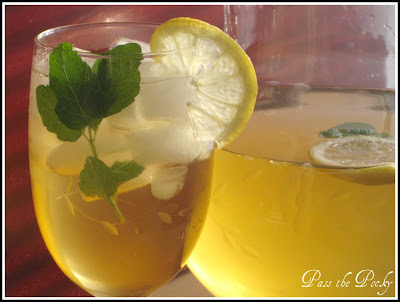 Ok onto the good stuff!   This is where the tomboy'ish side of me comes out.  I love looking at cool cars.  I often torture my Twitter friends with random pics of cars I see on the streets. 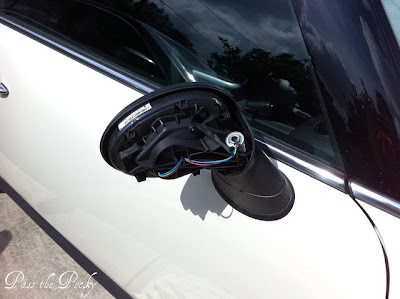 The first pieces that I had swapped out were my black stock side mirror caps.  I priced a few online stores and surprisingly my MINI dealer had the cheapest price.  Unfortunately they wanted a ridiculous amount for labor and shop fees.  I told them I'll swap the caps out myself. 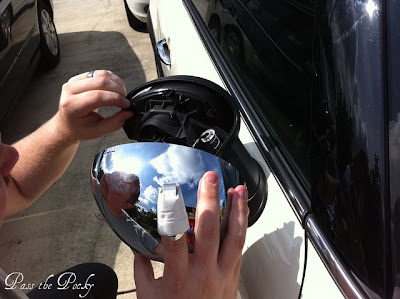 Using a $2 Pampered Chef Nylon Pan Scraper that I bought off eBay, Doug with his broken finger used the simple kitchen tool to pry off the stock caps.  Once off, it was a breeze snapping on the new chrome caps. 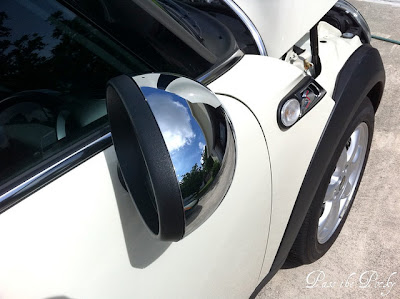 Next up was replacing my stock bonnet air scoop.  Doug had to unscrew a bolt underneath the bonnet and used the same pan scraper to lift  up and remove the air scoop. 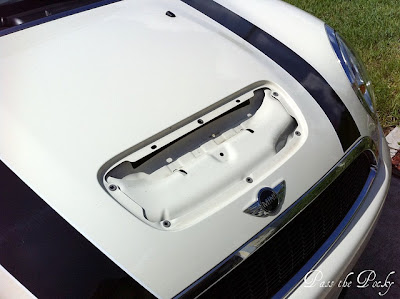 Once the stock scoop was completely removed, Doug replaced it with the chrome scoop which was also purchased from the dealer.  Easy peasy! 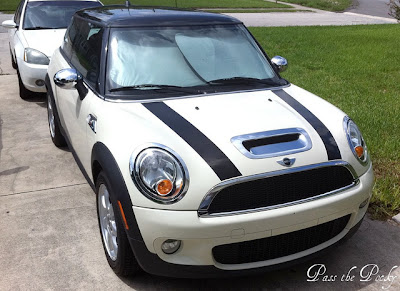 I'd love a set of shiny, chrome rims for my tires but sadly that's long, long away in the distant future.  They're a bit too expensive for me right now.  Booo!!   I'll be saving up for quite awhile.   For now I'll settle for a chrome trunk handle.  I need something on the back of the car to balance out the shiny front.   Girls and their silly toys, right?!?!   Ha!  :)
Email Post
Labels: Chrome bonnet air scoop ginger root iced green tea Mini Cooper S mint simple syrup

Kim said…
As always, thanks Mr. Fuat Gencal for dropping by. :)

SimonaGabriele said…
The health benefits of Diet Tea depend on their composition. Sometimes, this is just a single ingredient, while other times it is a combination of a few herbs and flowers.
October 14, 2018 at 4:42 PM