Friday I went to Ozzie's Crabhouse for lunch.  I went with a co-worker who really wanted to sit outside to eat.  Ugh!  I live in Florida and even though it's already the end of October, it's still really hot outside.  But, since he picked the restaurant, I reluctantly agreed.  Talk about a silver lining!
I got to meet this little guy.

We have tons of squirrels all over the place but the special thing about this little guy is that he was not afraid of us.  As soon as he saw us, he ran up to my feet and stood up.   I swear if he could talk, he would have said "Can you please order me a dozen oysters on the half shell?"  Unfortunately I don't have that kind of cash so Harold had to make due with some oyster crackers instead.

After four crackers, Harold had enough.  He left and headed to the bar area for a beer.  Oyster crackers can be a bit salty.  Now it was time to feed myself.  I ordered the House Fish Sandwich with a side of fries.  I think that gigantic piece of fish was cod.  It was a really simple but tasty sandwich. 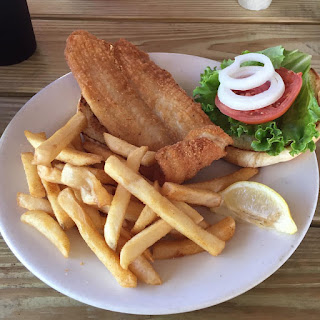 The meal was solid and pretty affordable for lunch but the best part was the pre-meal entertainment.  For about 10 minutes I almost felt like a Disney Princess bonding with the cute fluffy forest creatures.  Too bad I had to go back to work or else I would have joined little Harold at the bar for a drink.