Yesterday's dinner was good but really unbalanced.  I can't get it right every time.  My hubs caught a cold (somehow in 90 degree weather), and went into hibernation.  I spent the whole day watching YouTube videos.  I found a vegan Asian food channel by YouTuber MommyTang.  I sat for hours and watched video after video of this lady chowing down.  It sounds weird but there's something really entertaining about watching a lady sitting in front of a camera while eating massive quantities of food and her kids are running around in the background.  These food videos are called Mukbang. They're very popular in Korea. Tons of people do Mukbang videos on YouTube but MommyTang is the best.  She's freaking hilarious. After watching one particular video of her inhaling 10 pounds of baked potato wedges, I had to have some too.

I scrubbed clean five small russet potatoes, sliced into wedges, and tossed in olive oil, salt, pepper, and garlic powder.  Into the oven for 45 minutes at 425 F and done!  I dipped my wedges in kewpie mayo, Sriracha, and ketchup.  Mmm... 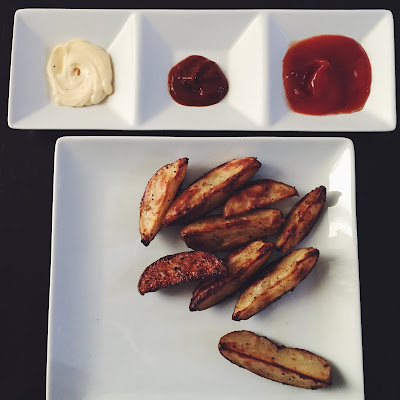 I cut off the bottom of the plate.  I should have centered the photo better.  I didn't realize my mistake until I posted it here.  I would have taken another picture but I had eaten everything already.  Lets just pretend it was an artistic decision.